This is part 2 of a blog about small photo quilts.

After making the two smaller quilts, I printed this larger winter scene in 2 halves and pieced them together, to make a larger quilt for myself. I added two outer borders to frame the scene.  It is called Winona on Ice.
This photo was taken several years ago, and I always wanted to quilt it for myself. This is the view of Winona Lake IN when you first arrive.  Now that the quilt is finished; when I wake each morning, the first thing I see is this quilt! It is the next best thing to actually being at Winona! I like this photo so much that I'm thinking of having it printed on a larger piece of fabric! 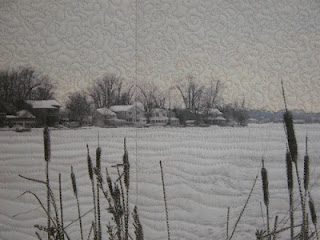 Again, using the Bottom Line thread (Superior Thread)  in the top and bobbin, gave me quilted texture without covering up some of the tiny details. It was important for me to carefully detail all the cottages across the lake; as I know most of the people that live in them. I chose a light gray for the sky, but right above the horizon there a subtle orange glow, so I used a soft coral thread for the quilting. If you look closely you will see the shape of a ginkgo leave quilted in the upper right hand corner of the photo and border. So with this fine thread you can achieve interesting effects with machine quilting. 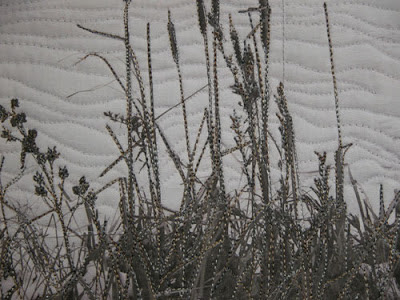 The frozen lake is quilted with light gray. The weeds in the foreground are detailed with Superior Threads # 855 Rainbow thread. It was the perfect choice. This thread is quite a bit heavier, so it gave great ragged texture to all the tall reeds and weeds on the shore nearest the viewer.

Larger photos of the quilt are on my website.

The photo was printed on "Printed Treasures" by Dritz.

After this quilt was completed, I felt sufficiently "warmed up" and ready to tackle a larger design; so I  made  End of the Hockey Season! This was a subject of many blogs.

Usually after the holidays I find it difficult to begin a new project.  This year I had numerous things going at once.  Early January I flew from frozen Wisconsin to Florida to visit friends and relatives.

First I visited my cousin Janet who lives outside of Orlando.  We spent 3 days together. It was wonderful to be with her, and we could be outside in shorts and t-shirts!  So I made a tiny quilt for Janet and her husband.
When one doesn't feel too creative it is a good idea to make something small.  So I chose one of my favorite photos of Winona Lake, IN; (Janet and I both love Winona) added two borders and quilted the photo for them.
I love how the quilting accented the piles of ice along the sidewalk.  I used a variegated gray/brown for the dark areas and a solid light gray for the snow.

After my visit with Janet, I drove up to Amelia Island and visited my friend Sally. Sally was the designer for my book A Black and White Tale.  She was staying at a wonderful house right on the ocean. The view was absolutely amazing. Again, I was comfortable wearing shorts and t-shirts.  It gives you a great sense of freedom, not having to wear heavy winter coat, scarf and boots. Sally is always taking photos with her iphone. Following her lead, I took some too.  We had a short but adventuresome visit. We shopped, ate all our meals out, and even took a boat tour of the area.


For Sally, I made a photo collage, using some of the pictures I had taken, and one that Sally took. One of the strong visual elements of the beach house was the stairway over the dunes.  You will see it on the right side.  On the left is a sliced up photo of an old shrimp boat that is still operating on Amelia. The dark diamond shape is a picture by Sally that was an image of a beautiful hosta-like plant that I was waiting to see bloom.  It bloomed after I flew home, so Sally sent me the photo. Behind the diamond is a look down the shoreline.  Above it all is a combo of sky-scapes that I layered on top of each other.

This was great fun, experimenting with Photoshop and transparencies at many levels.  After it was printed on "Printed Treasures" fabric, I added a double border and quilted it.
For the quilting of all the above pieces I begin with monofilament thread in the top and bobbin.  With feed dogs down and darning foot installed, I outline the basic structure of the quilt. Then I begin adding colored threads.  I have found that using the Bottom Line on the top is great on photos because it is a fine thread, and allows the photo details to be seen.

When heavier thread work is called for I use whatever I want! Both the above quilts have wool batting and are bound with bias binding.  Bias makes a finer, longer lasting edge that using strips of fabric cut across the grain!

By the time I completed both of these quilts, I was ready to begin something a little bigger.  This will be the subject of my next blog.