If you are one of my regular readers, you will remember my blog series on designing and sewing Garden of the Sun God. After a bit of time without receiving any significant awards for my work, I was beginning to doubt my abilities. Over the years, I have learned that there are many ups and downs to working for yourself and as an artist.  This is just one of those things. All of my thoughts, dreams and life are stitched into this quilt, it took longer than many I have designed.  Today I am thrilled and am basking in the glow!
This weekend the judges at Mid-Atlantic Quilt Festival in VA, awarded the piece "best machine workmanship" in the Innovative category. I am sending them a big thank you for the award.

A Different View of a Garden Quilt

It was just before the holiday season when I stopped to have dinner with my son in Chicago.  My creative mind was in the "off" mode at the time, and he suggested that I start a quilt called "Hockey Garden." Of course I immediately dismissed the idea, because I have already made a hockey quilt. Hockey Mom was made years back when both my sons were playing hockey and my husband was coaching.  Hockey was all that was discussed in our house that particular year. I did have great fun making this quilt and it is my only self portrait.

But as time passed by, I decided that I had a really good idea for a hockey garden quilt.  The next few posts will show the piece in progress. You may recall my post called the World's Most Expensive Free Rose Bush? A year or two ago, my neighbor gave me a start from her grandmother's old fashioned rose bush, and I used my son's broken hockey sticks to keep it under control.  I decided to take this same idea and make it into a small quilt.

So here is the beginning of my next quilt.  I've pieced together a sky background, the foreground is a little bit of garden soil and grass. My idea is to have a garden of fragrant flowers growing in and around some smelly hockey gear.  Only mother's with hockey players will truly understand this. 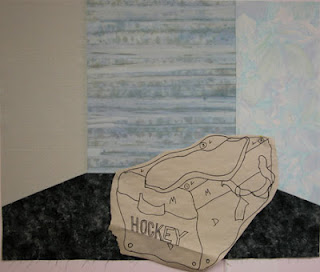 Here is the hockey bag which is central to the life of a hockey player because it contains all of their expensive equipment.  No matter how often the stuff is washed there is always a very strong unpleasant aroma attached to it.  The bag is also central to my future garden as a planter.

There will be more later.