One of the great things about the quilting community is that when we get together, we learn about new ideas and products.  Several weeks ago, I judged and taught at the NC Quilt Symposium in Raleigh. Karen Kay Buckley's room was right across the hall from mine, and we spent lots of time talking about the quilt world. She showed me her new signature scissors. 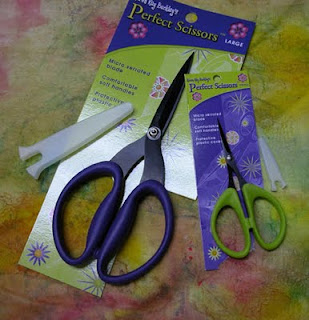 The first thing that appealed to me was the color of the handles!  Then I realized that they were large soft plastic that was comfortable in your hand. I had heard of special scissors that "grip" the fabric, rather than push it away from the blades. They have micro serrated blades that grab the fabric and make it easier to cut and trim.  The price is modest. $19.95 for the small 4 inch pair and 25.95 for the 7 1/2 inch pair. What a great gift for the quilter on your list or just for yourself. Here is a link.

I also mentioned that I was a judge for their quilt exhibit. Probably, I have just as many opinions about judging as most other people. That's why I wanted to become a judge. After years, I realized that there is no understanding why some quilts receive prizes at one show and nothing at the next!~ It will always be an enigma because it is such an subjective process.

At lunch, we did have fun together. There was a surprise hanging in the ladies room!
Judges can have fun too!


Have a great Fourth of July.
Ann

Of Magazines and Machine Quilting

Yesterday was a great day.  I finished machine quilting my featured quilt for a solo exhibit at the LaConner Museum and a new issue of Machine Quilting Unlimited arrived in the mail.
I haven't read the entire issue yet, but if you are interested in improving your machine quilting, there are plenty of articles in here for you.  I have a 5 page article on "Keys to Successful Machine Quilting" on page 33. There are lots of large photos to enjoy and study throughout the entire issue! I am impressed with the quantity of information included in this publication.

This is just a teaser, but in keeping with my machine quilting theme.  These extra large spirals are scattered across the surface of a large coneflower garden. (I'm not done with coneflowers yet!) I am continually trying to improve the scale and visibility of my quilting and I feel that I have succeeded this time.

It's been a month or so since I added this quilt to my website. This is my first chance to blog about it. In April my husband and I drove east for a book signing.  We stopped at Gettysburg PA on the drive home.

I'm not a fan of war. As a child I accepted war as a fact and a part of history. As an adult and a mother, it is difficult for me to understand why governments declare war on each other. Nothing seems to be solved at the wars' conclusion, so many people are killed.  Depending on what statistics you read up to 60,000 men died at Gettysburg alone.
When we arrived in the area of the battlefield, it seemed to be a quiet but boring farm landscape. The unique wooden fencing and black stone walls interested me. All the rock in the area is volcanic and black. Huge rocks and boulders are scattered everywhere. It would be difficult for a farmer to till his soil because of the rocks. It would be a lifetime of work to just remove the small ones from the fields.The huge boulders are to heavy to move. So the farmers created small rock walls on the boundaries of their land. The rail fences were also used in 1863. They were constructed by leaning the rails up against each other without nails or ropes to hold them together.

I've never liked fences, but they criss cross the landscape and visually hold it together. They were obstacles on the battlefield the last 2 days. There were stone markers scattered everywhere, marking an event or person that was there in July of 1863.  The large open field looked like a combination wheat field and deserted cemetery. 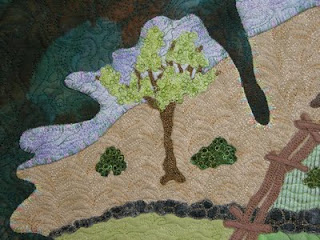 At 10:00 am we met Ed our personal guide to the battlefield. He is a retired executive from IL, who wanted to become a guide at Gettysburg. He's now been a guide for 7 or 8 years.  He made sense of all the empty quiet land. All those markers out in the field show where the soldiers from each state began each day.  Two hours later, he had described each of the 3 days battles, we drove around the fields and saw some of the markers. We finished up at "The Angle," where the last and bloodiest part of the battle ended at a black stone wall. While we were standing in this spot near the wall a man played "Taps" on a coronet. It was difficult not to be moved by the moment and circumstances.

Our tour was over, but the events at this battlefield and many others like it affect our lives.
I wish we could have stopped at the cemetery, we did drive past it.  There were so many graves.
There has been an effort on the part of the North and South to mark all the graves and find all the bodies.  The last one was found in 1997. There are memorials everywhere marking everything.  The ground is sacred to all those that work and volunteer at the battlefield.  They protect the area and try to keep it as it was during the 3 days in July 1863.

As far as the quilt itself, I created it on a piece of hand dyed green fabric.  The farm landscape is contained in the shape of a ginkgo leaf. The cannon represents one of the over 200 that were used in the battle is mostly machine appliqued.  The graves are machine appliqued and shaded with colored pencil.  Machine quilted with wool batting. 24 x 23 inches.