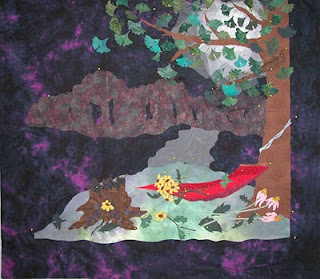 Somewhere along the way, I must have stopped taking pictures. Because you can see the quilt has many more elements. The hammock eventually became red.  I put in a stump on the left, in place of the grass.  I was troubled by an empty middle, so I added a dark gray print that becomes the opposite shoreline.  I slashed into the fabric to create some texture, and I don't particularly like that!

Meanwhile, the entire quilt is troubling me. I kept asking myself why am I making this quilt?  During this time, I kept moving things around until I achieved some kind of interesting composition, up until now, the quilt  wasn't working on an artistic level.

So you can see now, there are ginkgo leaves on the tree. This softens the moonlight and the severe righthand edge to some extent.

As I thought about the scene of the accident, which I was able to walk past about 3 weeks following the terrible event, there were flowers still laying on the edge of the lake. Then I thought, of course, I need to put my flowers at the scene.  I set to work cutting out little black eyed susans because they bloom in profusion in the area.  Then I cut the long stemmed pink cone flowers and laid them on the ground below the remaining tree and hammock. Finally I felt that the quilt might be coming together.  So I began embroidering and appliqueing the elements.

Thursday in a bold move, I basted the thing together and started quilting.  Before I could do anything else, I needed to cut away the reflection in the lake, the white blob of tulle was so visually distracting to me. So I began quilting the center section and spent the evening trimming away the white tulle.  Maybe........it is getting there. Somehow I feel I must modify the shape of the reflection, it seems too small. 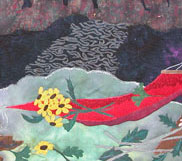 I will spend the afternoon working on what I have, and see what I can do to make the piece visually more interesting.   There will be more.  Please add your comments, I find them helpful.

I like it better without the tulle. However the merge between the lake and the background seem way to stark. I love the flowers---we often see the flower/memorials. Many of them have candles too.

We just joined as followers, and are looking forward to catching up on your blog ! We hope you don't mind if we comment on this quilt and the story that inspired it. The middle part that was slashed into does seem to distract from the scene. Perhaps that fabric could be made much darker - or even black - so it simply fades into the distant background? The background should just be moody and dark, which the mottled purple fabric achieves. We really like the tree, moon, lake and foreground, with the hammock as the focal point, and the otherwise minimalist and contemplative scene.

My plan is to remove more of the tulle, in the "reflection" part. Perhaps if I get a chance to sit down with the quilt this evening, I can pull out more. Both of your comments have gotten me back on track!

Perhaps you need to add some shadows to soften the moonlight? I like the idea of the adding the flowers and the stump. You could heavily quilt that opposite shoreline with thread to resemble vegetation and maybe you would like that more. I like the open/slashed areas. Perhaps you are making this quilt to honor the spirit of the young life lost so that when you walk by the scene sadness doesn't engulf your heart.